This is a recolor of SnowStrom from MTS' Will Loyd Wright Dollhouse clone. You need to go to MTS and pick up the dollhouse first or this won't show up for you because the file isn't included. You can find SnowStorm's dollhouse here. It's made to fit Christmas. Enjoy!

Download Here
Posted by TheNinthWave at 11:26 PM No comments:

The Sims 2 - Seasons Snowman Teddy for The Sims 2

This is The Sims 3 Seasons snowman teddy for The Sims 2. It's the same price as the base game teddy bear. There may be some discrepancies in the joints, but nothing you'd notice in game. Enjoy!

Posted by TheNinthWave at 9:06 PM No comments:

The Sims 2 - TS3 Base Dreadlocks for The Sims 2

These are The Sims 3 Base Game female dreadlocks for The Sims 2. They are wearable by Adult and Elder women only. They are binned and familized. They are not animated. They are not pookleted. You need the mesh and at least 1 recolor in this zip for it to show up properly. Enjoy!

Download Here
Posted by TheNinthWave at 7:44 AM No comments:

The Sims 2 - Seasons Concrete Bench for The Sims 2

This is The Sims 3 Seasons concrete bench for The Sims 2. Found under seating/misc. Enjoy!

I've converted the only 2 statues from The Sims 3 Store Arcade Regency set, the dog and man for The Sims 2. Both statues are found in decorative/sculpture and both cost 500 simoleons. Enjoy!

Nearly All Files Restored, In Good Standing With Fileswap and 4shared

Thankfully all but 53 of the 730 total files on the site (which reported recently to fileswap as copyright infringement) have been restored by kindly contacting both fileswap and 4shared support. I am now in good standing with both fileswap and 4shared and can upload freely. I am in the process now of backing up all files from both sites just to be safe so if the need arises I can restore the files again. I am the kind of person who never gives up even when dealt harsh blows, all of you know this if you know me and my history with simming. The bad guys have not won, and you are now free to use my files in your games or for your cc needs. We're nearing our 3rd year anniversary here at TNWS next year, so I want to thank you all for your continued support. This really is a very wonderful Christmas present to me. As always Enjoy!
Posted by TheNinthWave at 4:31 AM No comments:

Here it is finally. This is still considered in testing because I can't actually play TS3, but I can create mods for it in s3pe. I may have missed some rewards. If I missed one, just comment here the exact name of the reward, and I will be able to fix it. This will work with Seasons, as well as any EP released before Seasons and the Base Game. I Fixed The Link, So Sorry! Enjoy!

Email ThisBlogThis!Share to TwitterShare to FacebookShare to Pinterest
Labels: Game Mods, The Sims 3

Okay first of all I want to say don't hate. This is an older creation of mine. This is so old that The Sims 3 base was the only game for The Sims 3 at the time. So everybody including me was still learning. And I think I did a pretty bang up job on it if I do say so myself. I can't load Sims 3 on this current computer, but I can dig up very old files from the past and since affinity came back with a lot of older files from non-staff creators on their site, I can now upload these here as well, in case anything ever happens to them. This is great for gingers. And no I don't have any plans (or know how to) make non-defaults. Enjoy!

Download Here
Posted by TheNinthWave at 2:33 AM No comments:

I've extracted some skeleton from The Sims 2 Base Game (possibly Grim Reaper) and made it into a lamp. I didn't use the texture provided, I made my own. Found in Lighting/Floor Lamps. Enjoy!

Download Here
Posted by TheNinthWave at 1:16 AM No comments:

I found these cute Yeti sculptures from Seasons, and I just love them. They are technically not magic gnomes (to my knowledge) in The Sims 3, I found them under plain table sculptures in the catalog, but I thought they were the perfect size and dimension to be gnomes so I cloned it from one of my other gnomes. Since it's cloned from one of my recent custom gnomes it not only functions as a gnome (can be kicked, stolen, and stolen back), but will also fit on any surface, and will function as a valid centerpiece when dining (sims don't push their chairs away from the table, saves on space). Included are the mesh (blue) and the two recolors to match EA's presets (yellow and fuchsia) Enjoy!


Posted by TheNinthWave at 12:22 AM No comments:

The Sims 2 - Seasons Scarecrow for The Sims 2

This is The Sims 3 Seasons scarecrow for The Sims 2. Found in decorative/sculpture. Price is 160 simoleons. Enjoy! 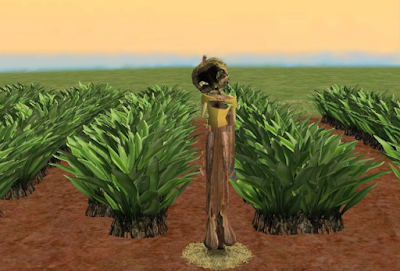 Posted by TheNinthWave at 8:20 AM No comments:

The Sims 2 - Seasons Floor Plant for The Sims 2

This is The Sims 3 Seasons floor plant for The Sims 2. Enjoy! 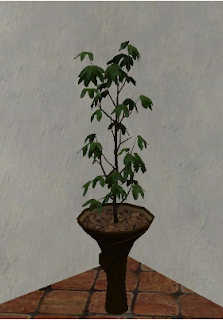 The Sims 2 - Seasons Jason Hockey Mask for The Sims 2

This is The Sims 3 Seasons Jason hockey mask for The Sims 2. For adult males only. You need both the files in the .zip for it to function. Found under glasses. Enjoy! 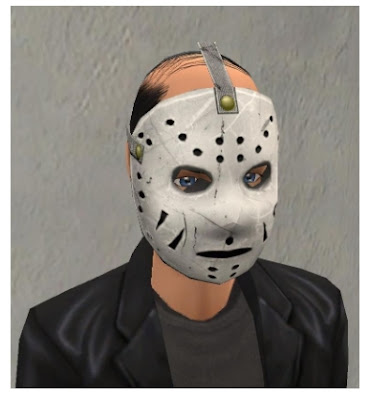 Posted by TheNinthWave at 4:23 AM No comments:

The Sims 2 - TS3 Holiday Edtion Gnome for The Sims 2

This is The Sims 3 Base Game Holiday Edition magic gnome for The Sims 2. This gnome will function as a gnome (can be stolen, stolen back, and kicked), and will also fit on any surface as well as function as a valid centerpiece. Found in decorative/sculpture costs 68. Enjoy!

Posted by TheNinthWave at 11:42 PM No comments:

The Sims 2 - Seasons Patio Furniture for The Sims 2

Here are The Sims 3 Seasons patio dining table and chair for The Sims 2. Enjoy! 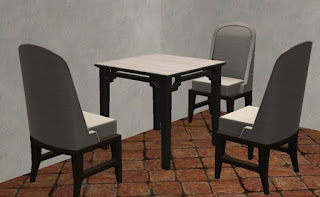 The Sims 2 - The Fire Extinguisher as a Decorative Wall Hanging

Michelle requested I make the fire extinguisher used by sims when putting out fires as a decorative wall art so she could do something custom with it. Found in decorative/wall art and costs 120 simoleons. As with all wall art, if you have Apartment Life or Mansion and Garden, you can adjust it up and down the wall with [ and ] keys. Enjoy!

This is The Sims 3 Cast Iron Skillet Wall Sculpture for The Sims 2. As with any wall hanging, you may adjust it up and down the wall with [ and ] keys. Price is 120 in decorative/wall hanging. Enjoy!

The Sims 2 - Seasons Lounger for The Sims 2

This is The Sims 3 lounge chair for The Sims 2. Found under recliners. Enjoy!

Download Here
Posted by TheNinthWave at 4:31 PM No comments:

The Sims 2 - Seasons Gnomes for The Sims 2

Here are all the Seasons seasonal magic gnomes for The Sims 2. Included in Winter, Spring, Summer and Fall. Price is 68 simoleons for each. They function just as gnomes do in TS2 (can be stolen, stolen back, and kicked), and will also fit on any other surface as well as function as a centerpiece. Enjoy!

The Sims 2 - Seasons Faberge Egg for The Sims 2

This is The Sims 3 Seasons Faberge egg for The Sims 2. Found in decorative/sculpture costing 775 simoleons. Expect more Seasons to TS2 conversions from me soon. Enjoy!

Posted by TheNinthWave at 8:26 AM No comments:

Well, irl I've found a new hobby of collecting antiques, so I thought I'd make a career along those lines. I didn't have time to make any chance cards, but if a lot of people say they really need them I can maybe go back and add some. It has the same icon as my historian career. Here is a run-down of the career.

You are scouring the local shops of Sim City to find the rarest coins you can. You will then take the coins to the local coin and antique pawn dealers to see if you can get more money than you paid for them. Always keep in mind that pawn dealers are always looking out for themselves, and will always give you the least amount of money that they can.

You've found that coin dealing is extremely tricky. One coin could be worth one price just based on the year it was minted, when another coin could be worth an even lower price even though it was released years before. You've decided that coins aren't that lucrative, so you've decided to venture off into collecting antiquated magazines. Who knows what rare magazines you will find next.

Now you are in the business of collecting rare and antiquated books. Anything and everything you can find, from an old book from 1654 about the Knights Templar, to a collection of Abraham Lincoln's letters published in 1907. Anything rare and unusual usually goes for quite a good deal of money these days.

Books aren't your thing anymore? You've decided to focus your attention on rare and collectible figurines. You've found some pretty interesting pieces while scouring the local shops. Including a very rare set of Rococo male and female bow and curtsey figures. Who knows your collection could be worth a lot of money.

You've decided to focus your attention now on something a bit more modern collecting autographed photos. Especially from celebrities who don't usually autograph. These are the types of things that are very rare, especially if they are very famous such as Madonna or Bob Dylan.

You are now interested in dealing with vintage and retro toys and games. The ones that go for the most amount of money are the ones that are still in the original packaging and never been opened. These retro toys and games can include anything from a first edition monopoly board game, to a classic 1970's Luke Skywalker action figure in original packaging.

You've gotten so much money from selling your other rare collectibles, that you are now in a position to buy and resell antique furniture. Of course, you can't get anything that's already in a museum, but you can get the next best thing, such as furniture made by artists who have worked with Queen Victoria in making her royal home look extra extravagant.

You are now souping up old cars, to bring them back into factory condition. You specialize in cars built from 1911 - 1960. There's a high price to pay for these rare automobiles and you are willing to pay it, if you can make some money off of it that is.

You are now a museum curator. You are the head of the local museum since you are an expert in all things historical, antique, retro, and vintage.

Level 10 - Appraiser for The Antiques Roadshow

You have been asked by PBS to be an appraiser for the Antique's Roadshow. You will use your expertise to guide others in how they should go about selling their old antiques. You've seen a lot of rare collectibles, and you've seen some that weren't worth what they were made of. You certainly do know your way around all things historical, antique, retro, and vintage.

Download Here
Posted by TheNinthWave at 11:11 PM No comments: