Happy New Year! This is the decorative pot from the recent Sims 4 Base Game update for The Sims 2, and the 9 recolours that come with the Sims 4 version. I called it Pot With a Slot, but it really doesn't have a slot, it has object intersection enabled, so you can place other objects inside the pot without the use of cheats. Good for placing any Maxis or custom plants you may come across. All of the recolours are included in the same package as the mesh. It's found in decorative/sculpture, and costs 50 simoleons (the same as the Sims 4 price). Enjoy!

Posted by TheNinthWave at 10:14 PM No comments:

TheNinthWaveSims Is Ready For Mediafire

Posted by TheNinthWave at 9:36 PM No comments:

This is a fairly accurate recreation of my own home that I have been living in for almost 3 years, and currently live in. It is a one story 3 bedroom, 2 bath home. We don't have many amenities, so I didn't add anything (except for the TV in the living room, which we don't have anymore). There is a juicer (I have a blender) and a coffee machine. There are 2 decorative washing machines in the laundry room. These are custom and are included. My roommate across the hall actually has a TV in his room, but it's on his dresser, and I didn't have the slots for it. There is a custom laptop in my room (I believe the laptop does not have extra options like blog about or browse web for, just a head's up). There is a backyard smoking area, and of course sims don't smoke. If you make a meal for the household or guests, sometimes they will go out back to eat. If you don't want this to happen, just delete the outdoor dining stuff. The house has full alarms (fire over the stove, and burglar on all exits). The phone is in the kitchen near the laundry room. EPs were used to create this house. It is recommended that you use the Sims2Clean Installer found here  to get rid of EP content you don't have. If you have all the EPs no need to worry.The default replacement mailbox is not included, but you can download it here . Enjoy! 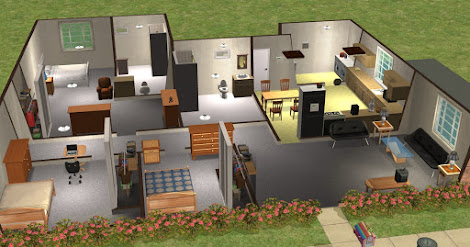 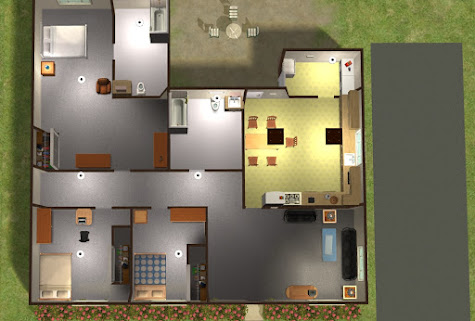 Download Here
Posted by TheNinthWave at 9:13 PM No comments:

This major goes through most of the decades of the 20th century as a course of study for University students. You will need FrikaC's Major's Made Easier found here to select your custom major in game. Below are the class titles. Enjoy!

The Radio: The First Invention of the 20th Century

Good News: We Have TVs Bad News: They're in Black & White

Woodstock and Other Happenings of the Late 60's

The Disco Movement Got People Moving

Everything in the 80's was Bigger

Trends of the 90's Starting with the Rachel Hairstyle

Pick a Decade to Write a Term Paper About

I couldn't think of an appropriate in game screenshot that would encompass the whole century, so I just have a screenshot of the major icon. The icon has a transparent background. This image has been enlarged. 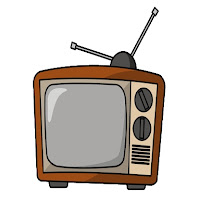 Posted by TheNinthWave at 7:26 PM No comments:

Email ThisBlogThis!Share to TwitterShare to FacebookShare to Pinterest
Labels: Majors, Retro, The Sims 2

While in game today, I noticed that the game has several themed collections, and while some are similar to Victorian, there is no fully Victorian theme for all objects. So, I decided to make a Victorian collection file. If you disagree with any of my personal choices of what I think to be Victorian, it is very easy to add or remove to the collection in game. Nearly every in game category is included (of course I had to leave out a few like cars, and TVs and computers). The collection does not include any build mode items, only buy mode. The icon is a rose with a lavender background (the same as the country bedroom icon). This collection should be the last one you come to in your collections in game, unless you install one made after mine. To Install: Place in Documents/EA Games/The Sims 2/Collections. DO NOT PLACE IN DOWNLOAD FOLDER! Enjoy!

Before Fanta, there was Nehi. Now, Nehi sodas are still in production, but are somewhat scarce around the world. I've made 3 Nehi sodas in the traditional fruit flavor sodas. They come in grape, orange, and peach. They have a pie menu within a pie menu, so as not to clutter your fridge. They can be found in your sim's fridge under Nehi Sodas.../Have or Serve..../. No cooking skill is needed to prepare, and they are available for all 3 meals. If you have Freetime, and plan on entering your sims in a cooking contest at Sue's Secret Kitchen, you will need Fway's Banned Fix found here. Only English and English (U.K.) translations are provided. Enjoy! 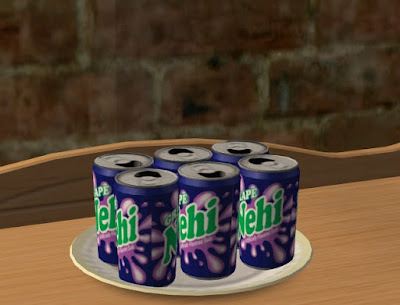 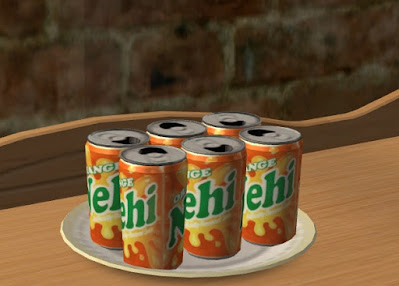 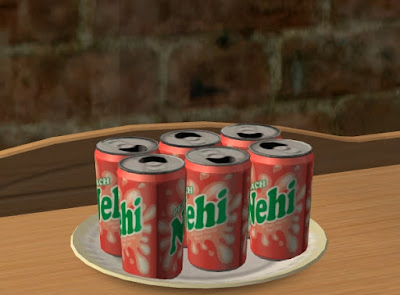 Posted by TheNinthWave at 12:49 AM No comments:

These are the only glasses that came with The Sims 4 Vintage Glamour for The Sims 2, and the 9 recolours that come with the Sims 4 version. They are unisex, so they are wearable by men and women. Wearable by young adults, adults, and elders only. There are lenses, but they are too faint to be seen. Enjoy! 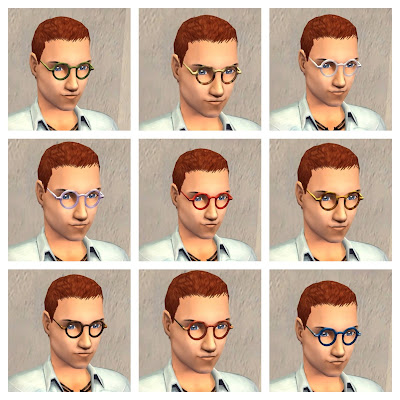 Download Here
Posted by TheNinthWave at 11:10 PM No comments:

This is the hair from The Sims 4 City Living called Bun Low Chain for The Sims 2. The hair is binned, and family binned, with elder binned in grey. It's wearable by young adult, adult, and elder women only. Each haircolour has a different colored headpiece (even if sometimes it's just the jewel in front that's different). Enjoy! 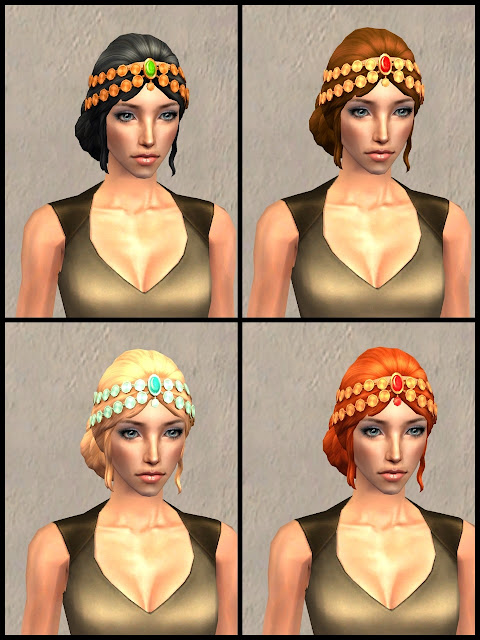 Posted by TheNinthWave at 4:24 PM No comments:

Merry Christmas Everyone! This is the necklace from The Sims 4 Island Living called Beads for The Sims 2, and the 9 recolours that come with the Sims 4 version. They are wearable by young adult, adult, and elder women only. They are found in glasses, and are multi-layerable, meaning sims can wear these with glasses or other accessories. Enjoy! 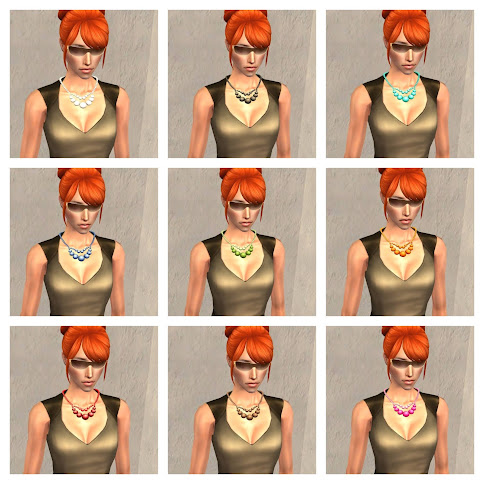 Download Here
Posted by TheNinthWave at 5:39 PM No comments: 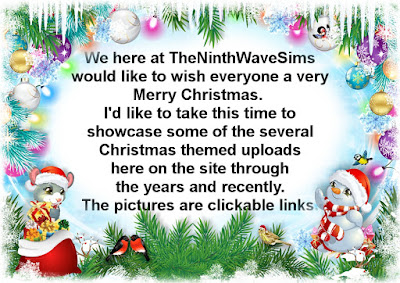 Last year, I only shared the Christmas post Christmas Day, but this year I think I will start today, December, 1st and also repeat it on Christmas Day. Because I think Christmas is pretty much a month long celebration. Enjoy all the Christmas goodies. I also have some new Christmas items planned for this year. Wishing everyone a very happy and safe holidays and a Merry Christmas from all of us at TheNinthWaveSims.com. 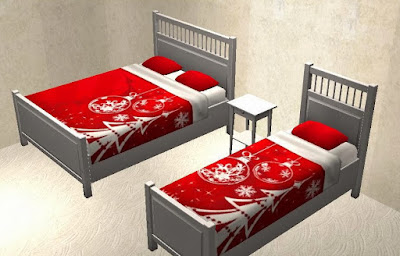 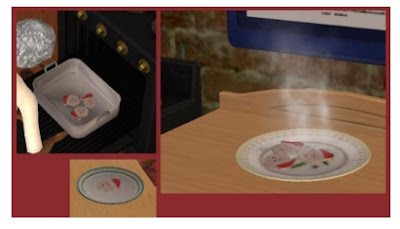 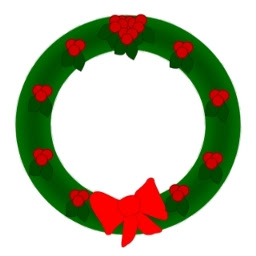 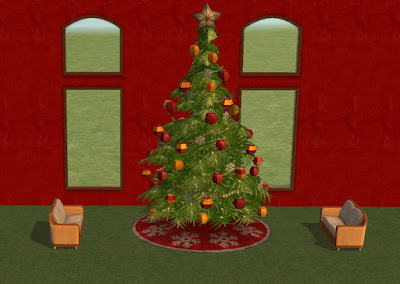 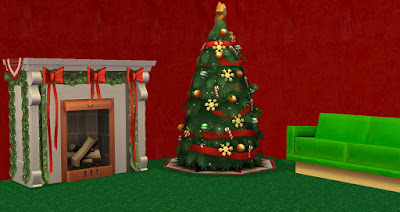 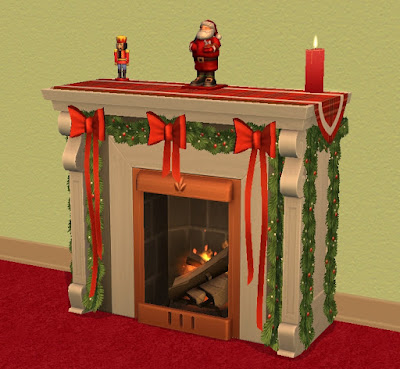 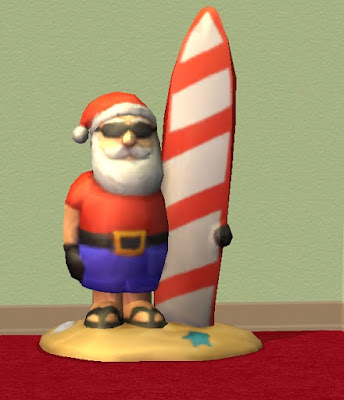 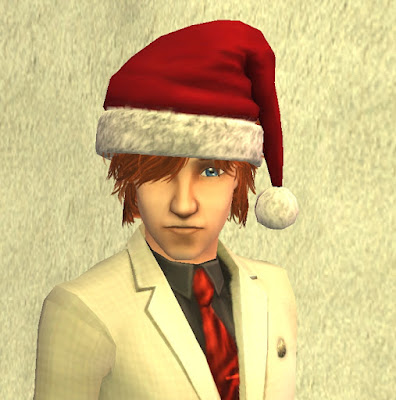 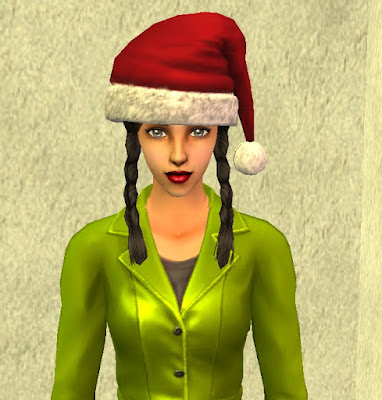 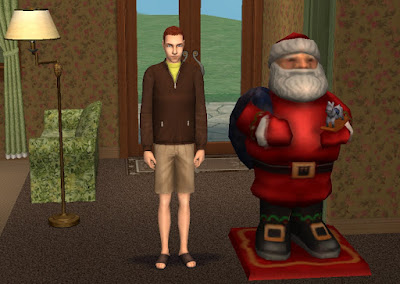 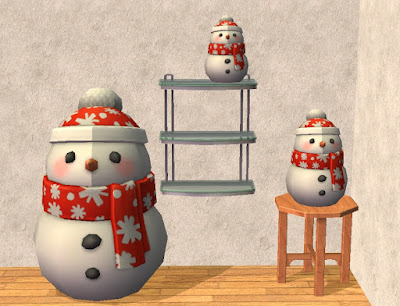 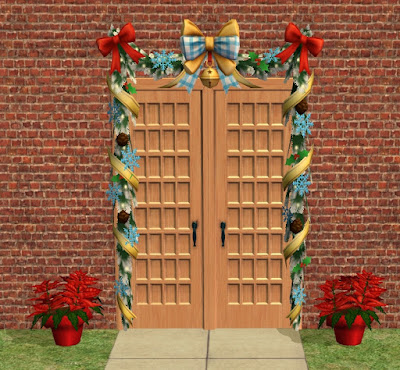 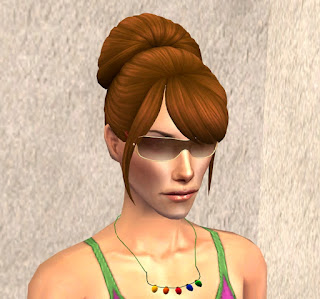 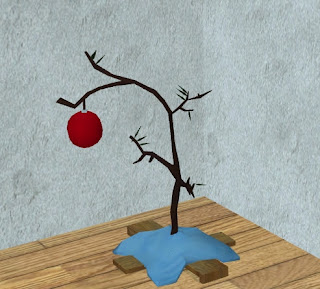 Merry Christmas to all! And a Happy New Year!
Posted by TheNinthWave at 12:00 AM 1 comment:

Email ThisBlogThis!Share to TwitterShare to FacebookShare to Pinterest
Labels: Holidays

This is the hair from The Sims 4 Island Living called Long Wavy for The Sims 2. The hair is binned, and family binned. It's wearable by young adult, adult, and elder women only. Elder hair is binned in grey. Enjoy! 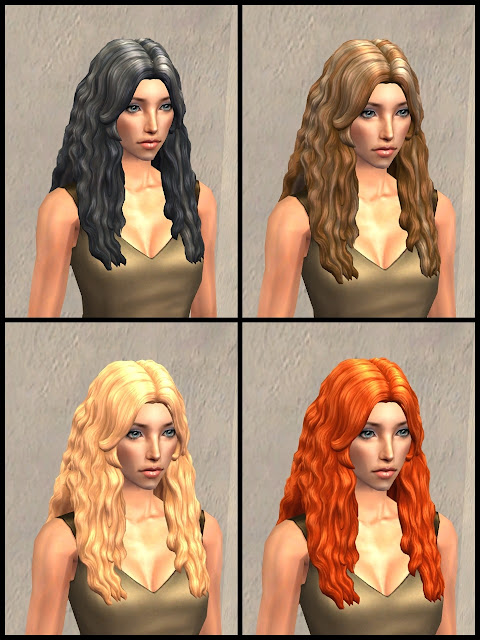 Updated December, 25th 2020 to fix a major joint problem. The front pieces no longer go inside the sim's body. Enjoy!

This is the hair from The Sims 4 Seasons called Long Wavy for The Sims 2. The hair is binned, and family binned. It's wearable by young adult, adult, and elder women only. Elder hair is binned in grey. Enjoy! 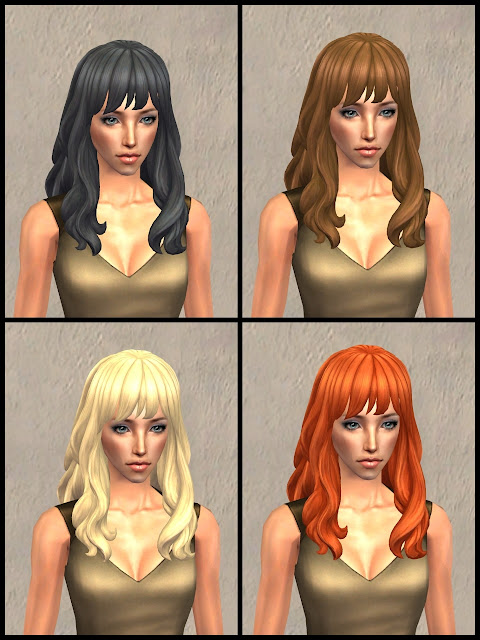 Posted by TheNinthWave at 7:26 PM No comments:

This is the hair from The Sims 4 Get To Work called Scientist Messy for The Sims 2. The hair is binned, and family binned. It's wearable by young adult, adult, and elder women only. Elder is binned in grey. This reminds me of the type of hair people like Raquel Welch, Janis Joplin, and Dolly Parton had in the 1960's. Enjoy! 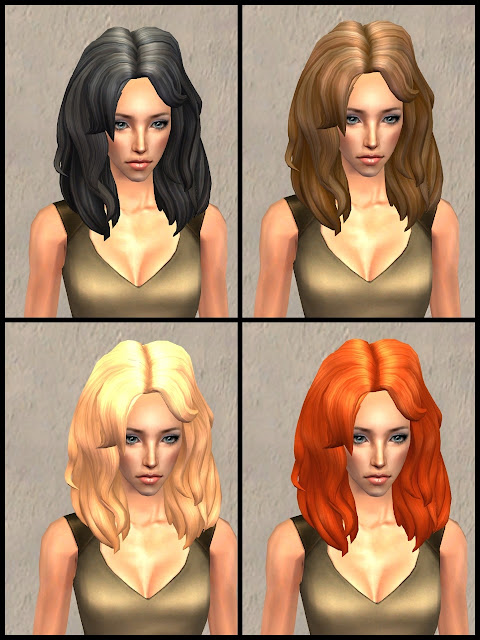