Mulan is a character on Once Upon a time. Mulan was on a mission to hunt the beast known as the Yaoguai which was terrorizing her village. She used Belle to hunt the beast, and later was informed that the beast was actually a human, and a prince named Prince Phillip but was cursed. Belle found a way to break the curse with good magic and introduced him to Mulan. Prince Phillip had lost the love of his life Aurora to a sleeping curse. She was later awakened by Prince Phillip, just as soon as he was taken by the wraiths. Prince Phillip's dying wishes were that Mulan watch after Aurora. Mulan, and Aurora with the help of Snow White and Emma Swan managed to trick Captain Hook and Cora from reaching Storybrooke.

The sim is packaged with quite a bit of custom content. All of the creators allow inclusion with sims, so I won't list them all. Enjoy! 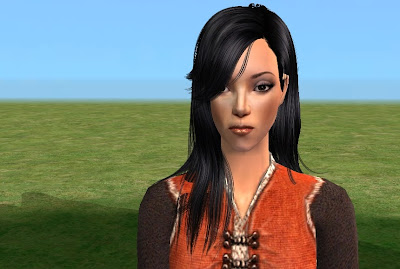 Email ThisBlogThis!Share to TwitterShare to FacebookShare to Pinterest
Labels: Once Upon a Time, Sims, The Sims 2