Hillary Clinton, also known by her maiden name Hillary Rodham or Hillary Rodham Clinton was the First Lady of The United States of America in the 1990's along side her husband former President William Jefferson (Bill) Clinton. They raised their daughter Chelsea Clinton while in office. After Bill Clinton's two terms in office, Hillary remained active in politics, and became a Senator. She even ran for President in the year 2008. In 2009, President Barrack Obama instated her as Secretary of State. She currently serves as Secretary of State under President Barrack Obama.

About the sim: She is packaged as an adult. Good traits to have for her would be - Aspiration: Popularity, Turn Ons: Grey Hair, Hard Worker; Turn Off: Unemployed. Seasons is required for the hair (alternative, use clean installer to remove EP content).

The custom content: Eyes by @Stefan at MTS, skintone by Aloha Kay at Affinitysims, nose mask and lip mask by Rensims at MTS; facemask, binned hair recolor (blonde), and lipstick by me. Enjoy! 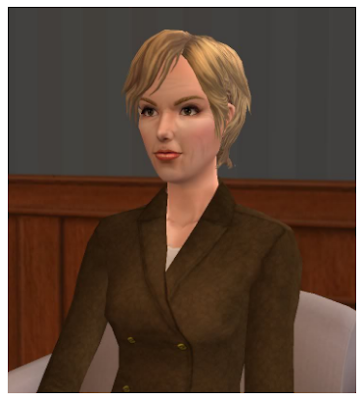 
Posted by TheNinthWave at 9:34 AM

Hey 9thwave, I love your stuff, and I would like to know if you could perhaps help me with 3 flawed hair meshes? Could you extract the meshes from these 3 hairs and make new meshes that allow these meshes to be available for adults, young adults, and elders in bodyshop please? There is one male hair and two female hairs. The male hair is available as an elder, but not recolorable; I'm hoping you could maybe fix that :P Thanks for reading and I hope you can help me :)